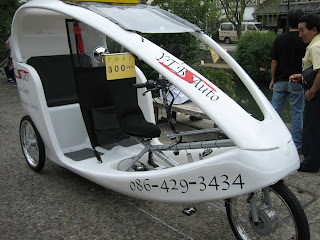 Velotaxi is a public transportation system that utilizes hybrid electrical bicycles in (mostly) metro areas. It was started in Berlin, Germany in late 90's before it made its way to the Land of the Rising Sun in early 2000's. Obviously, what's cool about this bicycle is that it has the electrical power to assist you when you're pedaling up the hill or you're lucky enough to give couple of Sumo Wrestlers a ride to the Yakiniku (BBQ) joint. What's also cool is that you can control when to activate/deactivate the "electric assisting power" at your finger tip. 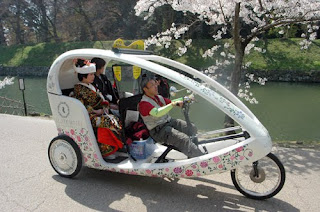 As I understand it, you can catch this bicycle taxis at most of the big cities in Japan. The cost is about $3 per first 0.5km for an adult then 50cents per 0.1km thereafter.

I personally have never utilized this system, but I hear if you got the time, it's a nice ride.

Um sir, I asked for Velotaxi. Nice try though. 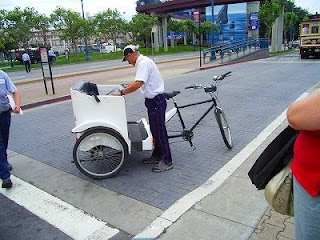