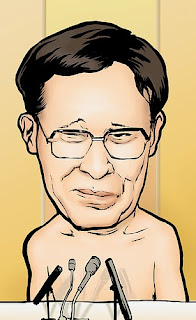 So what is this 新おにぃ or "New Onii"?
For Gaki savvy, you may already know that the phrase "Onii" is used by Chiaki who initially called her ex-husband Endo by this. It literally translate to "Elder brother," but of course Chiaki is not using this term as such, but more to show her dependency towards the man as if to say "You're LIKE my elder brother"

Anyhow, there's not much information about this New Onii, other than he is known to have appeared in TV shows as the extras here and there.