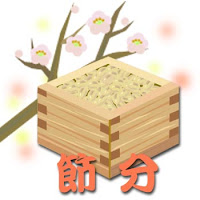 Setsubun (Bean-Throwing Festival or Bean-Throwing Ceremony) is the day before the beginning of each season in Japan. The name literally means "seasonal division", but usually the term refers to the spring Setsubun, properly called Risshun (立春) celebrated yearly on February 3 as part of the Spring Festival (春祭, haru matsuri?). In its association with the Lunar New Year, Spring Setsubun can be and was previously thought of as a sort of New Year's Eve, and so was accompanied by a special ritual to cleanse away all the evil of the former year and drive away disease-bringing evil spirits for the year to come. This special ritual is called mamemaki (豆撒き, lit. bean throwing).


And here's what's up with the sushi rolls in this clip.

It is customary now to eat uncut makizushi called Eho-Maki (恵方巻) (lit. "lucky direction roll") in silence on Setsubun while facing the yearly lucky compass direction, determined by the zodiac symbol of that year. Charts are published and occasionally packaged with uncut makizushi during February. Some families will also put up small decorations of sardine heads and holly leaves on their house entrances so that bad spirits will not enter.