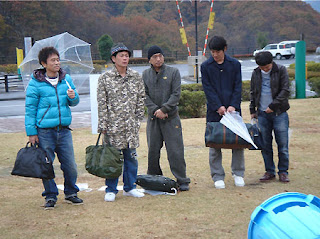 OK, it's official. According to this website, the Gaki members trained to become spies for this year's New Year's special. The following is a rough translation of the Japanese article:

After filming was over, Matsumoto was quoted as saying; "We sort of worked as a team.....but I was the only one carrying the team towards the end."

Close to 100 celebrities helped to trick the Gaki members into laughing during the filming--Matsuko Deluxe and Tatsuo Umemiya included.

In addition to already impossible challenges, new rules went into effect for the cast members after midnight such as "Don't Get Scared" and "Don't Get Caught."

Unchanged from last year, viewers may continue to submit their real time messages via the Gaki mobile phone site. Viewers this year can also send messages via Twitter (@Gakitsukatter).

The show's producers finally settled on Ibaraki prefecture as the film site after two months of scouting. More than 100 extras were on location.

After filming, cast members had the following to say:
Hamada: "We finished it without losing anyone."
Yamasaki: "My butt went through hell."
Endo: "Learning to be a spy was difficult. We pulled through as a team."
Tanaka: "It was hard but we helped each other until the end."
Posted by ShibataBread
Email ThisBlogThis!Share to TwitterShare to FacebookShare to Pinterest