Thank you to my teammates.

吉本新喜劇 Yoshimoto Shinkigeki is an established, well-known sketch theater in Osaka. Many famous comics performed here in their younger days, including Matsumoto and Hamada from Downtown. In fact, a variety show called "Lincoln" recently filmed an episode where Downtown and other popular comedians took the stage at the Shinkigeki and semi-improvised their way through a sketch. It had been almost 20 years since Downtown last did a show there, and you can see they were awfully nervous. 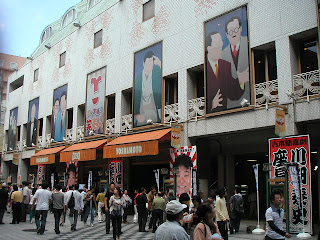 The show, which features many veterans, tends to recycle their "one-punch-line" jokes over and over in recycled plots each week. But I suppose that's what the audience (mainly older folks) enjoy. The material is really safe and never too over the top.

Amazingly, the show runs twice daily and three times on the weekend. It's televised locally (Osaka/Kansai Area) on Saturday and Sunday.

Having grown up in Osaka, I know a lot of the "recycled" jokes and it's hard to believe some have been around for more than two decades (maybe more). One of the things you notice as you watch this clip is how the cast members fall to the ground in reaction to someone telling a joke or delivering a punchline. Falling down is expected and actually completes the whole joke. 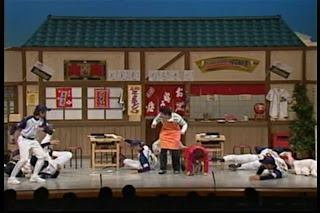 On a personal note, when I'm back in Japan and I happen to catch this show on TV, it first makes me realize it's the weekend and second, that I'm back home.

Following guests who appears in this sketch show are the regular of the "No Laughing" series but not the regular at the aforementioned Yoshimoto Shinkigeki.


Panzetta Girolamo - a celebrity born September 6, 1962 in Avellino, Italy. He lives in Japan and has been on Japanese TV starring in everything from dramas to cooking shows. He has also made appearances in fashion magazines. He owns a restaurant called "Ristorante Giromondo" in Gaienmae. Panzetta was the voice of the Italian car in the Japanese version of the American movie "Cars". He is also the author of several books and essays. (From Wikipedia)

梅宮クラウディア Claudia Umemiya - Wife of actor Tatsuo Umemiya. They have both appeared on the past three "No Laughing" series. She is now known for her awful acting and for always forgetting her lines.

The following two people starred in the "No Laughing" series for the first time this year: 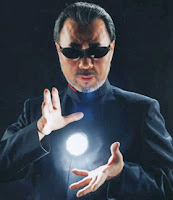 I wrote about Jimmy Ohnishi (ジミー大西) in prior posts. You can read about him here.