(Subbed) I want to eat my shoes!

Here's another video from the variety show 探偵ナイトスクープ or "Knight Scoop." 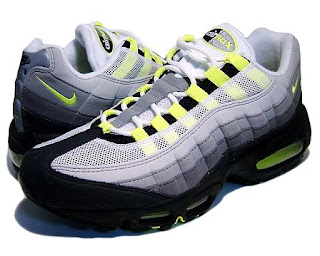 In 1995, Nike released a shoe called "Air Max 95" in Japan. And for reasons I can't remember, these shoes became so popular that the high demand drove up the shoe's price to an unprecedented level  (I've heard anywhere from $600 to upwards of $2,000).

Subsequently, groups of delinquent kids emerged throughout Japan to engage in a criminal activity called
エアマックス狩り, or "Air Max Hunting", where they targeted someone wearing the shoes, beat them up, and snatched their coveted Air Max 95's for a profit.

Thankfully, the phenomenon of beating up people for expensive shoes has pretty much disappeared in Japan, the reason being that shoes don't have the crazy mark up values that were seen in the mid-90's.