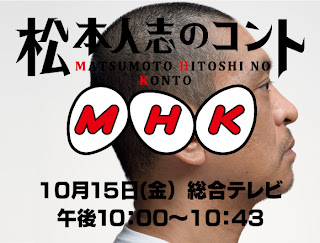 The pilot of MHK (Matsumoto Hitoshi Konto) aired on October 15, 2010 with lukewarm TV ratings of 6.2%
This is the first skit of the five skits aired that night. It evokes many head-tilting "huh?" with laughs which Matsumoto does best in his comedy.

A day after MHK aired, a documentary, which chronicles the making of MHK, premiered. The documentary shows the time, energy, and dedication Matsumoto put forth for his skits in a midst of all the other obligations he has.