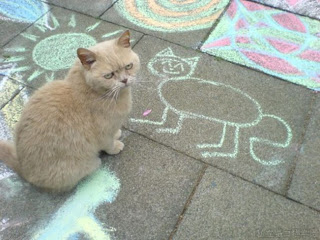 I spent some time working with kids in the Japanese public school system.  One thing that really struck me was how well a lot of them could draw.  I hate to stereotype an entire race like that, so let's just say this is a very subjective opinion of my own that has absolutely no scientific backing.  Of course, I also saw kids drawing stuff that was average or just plain bad.  But more often than not, there were kids drawing at a skill level higher than I would have expected for their age.  For example, a classroom of second graders wrote notes to me with pictures of people and animals that I just thought had more detail and accuracy than your typical second grader in the States.

So when I first watched this Japanese variety show with celebrities who can't draw, I wasn't surprised.  The way I see it, your average Japanese person can draw a pretty good gorilla or lion.  Maybe it's not that fancy, but it looks like what it's supposed to be.  The celebs showcased on this show don't have that skill, so the Japanese viewer can sit back and think, "Wow, I draw better than that guy!" and get a real big kick out of it.  Disagree with me if you will, but this show wouldn't be as funny here in the States because many of us would think, "I would totally draw the tiger the exact same horrible way!"

If it's true that Japanese, when compared to other cultures, can draw better, then you may be tempted to ask, "Why is that the case?".  Here's my theory: kids in the Japanese public school system get a lot more art time than what most public schools allow in the States.  So the answer would be as simple as that--you can draw better if you got more art time in school.

Now sit back and enjoy the show!  And, for those of you who have spent time in Japan, let me know if you've noticed the same thing....