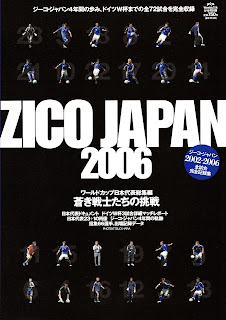 Arthur Antunes Coimbra, born 3 March 1953 in Rio de Janeiro, better known as Zico, is a Brazilian coach and former footballer.
Zico has coached the Japanese national team, appearing in the 2006 FIFA World Cup and winning the Asian Cup 2004, and Fenerbahçe, who were a quarter-finalist in 2007–08 in the Champions League under his command. 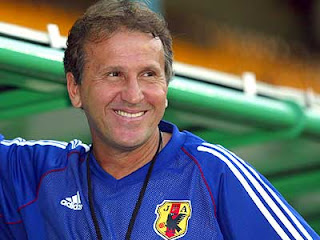 More on Zico's coaching career in Japan (From Wikipedia):

After the 2002 FIFA World Cup, Japan Football Association looked for a replacement for the outgoing Philippe Troussier, and chose Zico as his successor. Despite his lack of coaching experience besides his stint as Brazil's technical coordinator during the 1998 World Cup, Zico had great understanding of Japanese soccer from his playing days and his role as Kashima's technical director. In addition, JFA had grown tired of Troussier's clashes with the media while the players were frustrated with his micromanagement. In contrast, Zico commanded respect from reporters and urged players to express themselves on the pitch.

Although Zico attempted to instill a free-flowing, attacking mentality to the team, his regime got off to an uneven start, which included a 4–1 loss to Argentina in 2003. Japan had a respectable showing at that year's Confederations Cup but struggled again in the beginning of 2004, only narrowly beating Oman in the first stage of qualifying for the 2006 FIFA World Cup and several players were suspended after a drinking incident. Although Japan had not lost in its nine previous matches, he was rumored to be on the verge of resigning and a small group of fans marched in the streets of Tokyo demanding his firing.

He stayed on, however, and won the 2004 Asian Cup despite intimidation from Chinese fans and a team that featured just one European-based player, Shunsuke Nakamura. He then helped Japan qualify for the 2006 FIFA World Cup with just one loss.

Despite the rocky start, injuries to key players and even a bizarre offer from Garforth Town, Zico has led Japan to its third World Cup finals appearance and the third Asian Cup title in four tries. His Japanese team is heavily influenced by Brazil's short passing style, but he has been flexible enough to switch between 4-4-2 and 3–5–2 formations. In addition, he has had a respectable record on European soil, beating Czech Republic and Greece and drawing with England, Brazil and most recently Germany.

However, Japan failed to win a single match at the Finals, losing twice (to Australia and Brazil) and drawing once (to Croatia), and scoring just two goals while conceding seven. He resigned from Japan at the end of the World Cup campaign.