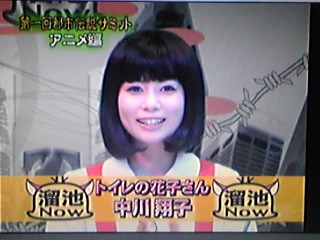 This show features four celebrities who compete in making their drawing, chosen by the host Hamada, to be the part of 4-cells manga piece.
Do you recognize the girl in this show? Her name is Shoko Nakagawa who appeared as a host in the "Urban Legend - My Neighbor Totoro" which I worked on a while back here.


(From Wikipedia) 4コマ漫画 Yonkoma manga ("four cell manga", or 4-koma for short), a comic-strip format, generally consists of gag comic stripswithin four panels of equal size ordered from top to bottom. (They also sometimes run right-to-left horizontally or use a hybrid 2x2 style, depending on the layout requirements of the publication in which they appear.) Though the word yonkoma comes from the Japanese, the style also exists outside of Japan in other Asian countries as well as in the English-speaking market.

Yonkoma can be found in many publications including manga magazines and newspapers throughout Japan. Traditionally the Yonkoma follows the certain format: Setup - Development - Climax - Conclusion. However, I have noticed there's been a trend in not following that format. And I've found some to be completely odd and strange. If you've been following my Facebook Page you have seen an old classic Yonkaoma such as "Kobo-chan"recreated into an obscure pieces.