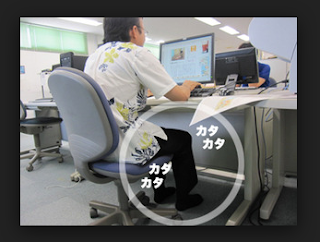 Japanese has a specific term for when we shake our leg or shake our knee as we're sitting down. And it's called 貧乏揺すり- Binbou Yusuri, which roughly translates to "Poor man's shake."
Why the "poor"? There are several theories:


1) It's depicting a poor man with not enough clothing shivering in cold.

2) It's depicting loan officer's shaking legs as he's waiting to get back what he's owned from the poor.

However the term has come about, the shake has a bad rap in Japan. I remember my mom would get pissed and yell at my poor man's shake. I couldn't help it. It just happens.